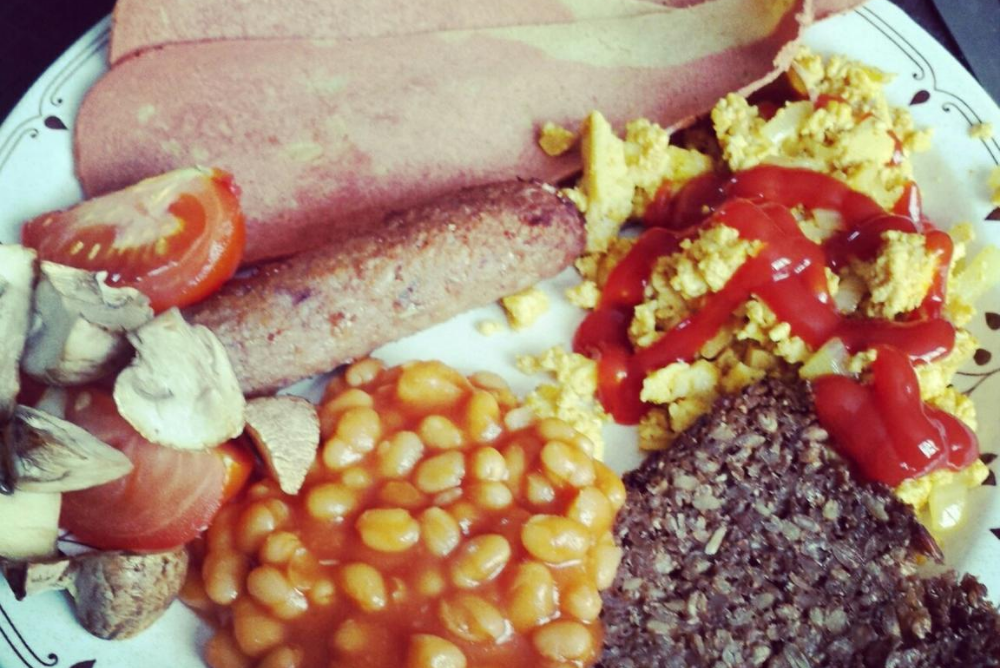 We can’t stress enough that veganism is not a diet – it’s an ethical standpoint and a lifestyle celebrating compassion to all creatures big and small.However, it’s also undeniable that nutrition forms a large part of vegan lifestyle.There is a very common myth ( vegan food boring ) which alone is enough to repulse many individuals from considering going vegan, and it’s perfectly understandable given how important the cultural aspect of eating is for us.

According to this popular myth, vegan diet is extremely bland and boring, and poor vegans have to graze on raw vegetables and yucky mock meats all day in order to survive.

Luckily, this vegan food boring myth, couldn’t be further from truth! There are literally thousands, if not millions, of delicious vegan recipes available out there, both online and in print.

The Vegan community absolutely loves sharing great food ideas, from healthy recipes to indulgent birthday cakes – all without a cost of animal suffering.

And it’s not like there is a lack of inspiration around. Many cuisines, such as Indian, African and Thai, have already invented tons of vegan recipes which are well-tried and easy to modify.

The only limit is your imagination!

This is not to say that vegan eating won’t require any extra planning, especially when you’re just starting out.

Of course, it’s necessary to revisit shopping habits, find appropriate vegan substitutes for kitchen staples such as eggs and dairy, and keep a few important nutritional considerations in mind, such as complete proteins and getting enough vitamin B12.

However, once you’re used to it (and it doesn’t take too much time to become a vegan pro!), it pretty much becomes a new habit, erasing the old ones completely, and food stops being the centre of your personal universe.

To convince you even further, we present to you our easy healthy vegan diet tips!

After reading and implementing those, you’ll quickly realise that vegan diet is anything but boring, really.

Get ready to experiment!

Negative attitude is usually a number one reason for why people fail their vegan journeys. If you want to make a change, it’s time to stop looking back.

No more comparing your new diet with sizzling steaks from the past! Don’t try to cook something that tastes and looks like a real chicken breast – because the only thing like that is, well, chicken breast.

Instead, prepare yourself for a journey to something completely different, but just as, if not more, exciting and delicious. It’s time to leave behind all this ‘vegan food boring’ mindset.

Give yourself some time.

This is especially relevant for shopping and cooking. Don’t rush it, give yourself enough time to browse the supermarket aisles and discover the best vegan ingredients available to you.

When cooking, give yourself sufficient time to concoct new healthy recipes based on some relatively less familiar ingredients. Remember, Rome wasn’t built in a day, and adjusting to a new lifestyle inevitably takes some additional time.

Soon enough, you’ll stop worrying about it and become a superefficient vegan superhero with tons of new exciting recipes up your sleeve.

There is no need to be embarrassed.

There will inevitably be occasional moments when you’ll feel like you need to explain yourself. Like meeting your neighbour Barry in the supermarket with a trolley full of “weird” products Barry will feel obliged to comment on.

Don’t try to be defensive or come up with silly excuses. Instead, just say “I’m going vegan, it’s something I always wanted to try, and now I’m experimenting with new healthy recipes”.

Chances are, you’ll get a lot more respect and understanding this way – and possibly, even genuine interest. You never know when the opportunity comes to inspire another person, who until that moment believed the ‘vegan food boring’ cliche!

Allow yourself to make mistakes.

So you messed up this new vegan recipe, all vegan options in your household are exhausted, it’s almost midnight and you’re very hungry. There is this yoghurt in the fridge though…a second later, boom, it’s gone.

Ok, you slipped – but don’t let it discourage you from experimenting with food! Get a couple of new cookbooks, browse the internet searching for new vegan recipes and get back to cooking. It will get better, we promise.

Research your eating out options.

Some people think eating out and going vegan don’t mix well, but these days it’s simply not true!

So many restaurants offer delicious vegan options, and even when those are not technically on the menu, most chefs will gladly accommodate to a special request. Best of all, these dishes will likely provide some inspiration for you to create your own vegan food!

So take a night off cooking and head to the city.

Avoid convenience foods as much as you can.

If something gives vegan diet a bad reputation, it has to be a vegan convenience foods selection at your local supermarket.

It’s very tempting to grab something like this on the run, but the downside is usually subpar to say the least. One can easily make a stretch from those rubbery bland concoctions to vegan food in general, and it’s simply wrong!

If you’re after a quick snack, don’t torture your taste buds and simply buy a couple of bananas instead.

As you see, eating a healthy plant-based diet is basically anything but boring. If you ever find yourself having trouble of coming up with new exciting vegan recipes, revisit the tips above for some extra inspiration.

We are currently working on a constantly updated Vegan Recipe section, which will be ready very soon. Don’t worry, it will also have mock meats and gravy and sausages and sizzling burgers and vegan cheese and vegan eggs etc.

Vegan diet is not only great for your health, the animals and the planet – it’s also delicious, versatile and exciting.

Jump on the wagon, and you won’t have any regrets –

we promise, vegan food boring is a myth!